The telephone and telephone exchanges: their invention and development
Tweet 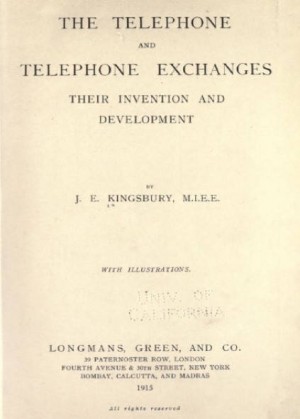 In the following pages the attempt has been made so to relate the inventions and developments in the telephone field that the record may constitute in effect a short history of the telephone industry. The original intention was to write a history, but I was advised on authority which in the book world is entitled to respect not to exceed the limits of a single volume. As that advice has been followed it is considered that the word ' history ' as a title should be held in reserve for the use of the author or authors who may produce the comprehensive treatise which the subject deserves.

The original intention has, however, been followed in an abbreviated form. The principal inventions have been selected. The circumstances leading up to them, the developments resulting from them, and the influences bearing on them, have been considered with all the detail that space permits. But telephone exchange service is not merely a matter of plant and invention. Technical, commercial, and political threads compose the fabric, and they are interwoven in the record. The recital of the prior causes has served in most cases to make clear the technical features.

In recounting the progress of Bell's invention reference is frequently made to the evidence given by him in various suits, noted for the sake of brevity as ' Deposition.' The full title is ' The Bell Telephone : The Deposition of Alexander Graham Bell in the suit brought by the United States to annul the Bell patents.' The suit was abandoned, but the deposition (in which is included evidence taken in other suits) was printed in 1908 by the American Bell Telephone Co. ' because of its historical value and scientific interest.' This book of 469 pages, though not published in the ordinary sense, is available for reference in most technical libraries.