The telephone systems of the continent of Europe (1895)
Tweet 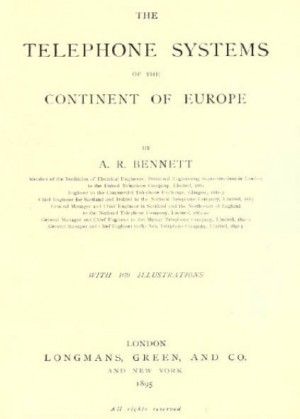 During the discussions on the existing state and future conduct of telephony in the United Kingdom which have taken place pretty continuously during the last few years, many references have cropped up to foreign and, more especially, to continental practice. Statements have frequently been made as to the existence of what to the British public have appeared fabulously low rates in Holland, Switzerland, Nonvay, Sweden, and elsewhere statements to which support was given, from time to time, by various consular reports. The facts set forth, the believers in, and advocates of, low rates in this country have endeavoured occasionally to turn to their advantage in argument, but, owing to lack of exact information and the denials of their opponents, with little result.

The apologists of the existing monopoly have either traversed /// toto the truth of the statements or have declared that the conditions under which such rates exist are radically different from those which obtain in the United Kingdom. They have asserted, for example, that the low rates are not inclusive of all charges ; that the subscribers have to pay the cost of their lines or instruments, or both, and, after connection, for any repairs that may be necessary ; that foreign telephone companies are not burdened with such payments to the Government as are imposed on the National Telephone Company here ; that foreign administrations (this has been specially said of Germany) have an absolute right to fix supports and wires wherever they please, underground or overhead, without payment ; that labour is less costly on the Continent than with us ; that foreign workmen and operators arc not only badly paid, but mercilessly sweated ; that the cheap systems are ill-constructed and worse managed ; that the low rates, if they exist, are only applied in small towns ; that they do not pay ; together with various other assertions intended, and tending, to create doubt, and confuse the advocates of telephonic reform.