Telephomania: The Contested Origins of the Urban Telephone Operating Company in the United States, 1879-1894
Tweet 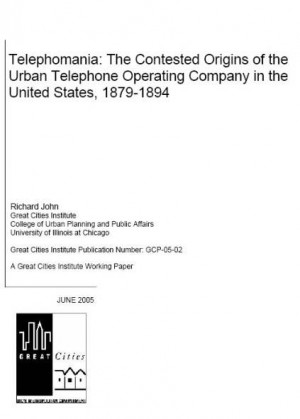 Recent scholarship on the early history of telephony in the United States focuses primarily on the expansion of telephony into rural districts in the period after the expiration of Alexander Graham Bell's fundamental telephone patents in 1894. The paper redirects our understanding of early American telephony by focusing on the rise in the 1880s of the large urban operating company.

At the center of the story is Charles N. Fay, the acerbic general manager of the Chicago Telephone Company. Fay's contempt for telephone users was legendary: at one point, he publicly declared that they suffered from a "telephomania" that predisposed them to be hostile toward his company.