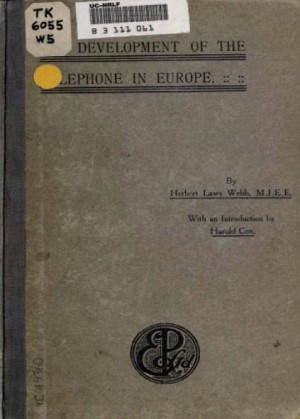 Of all modern inventions there is none that has so greatly facilitated rapid inter- communication as the telephone. The writing of a letter takes time, and the conveyance of the letter to its destination takes much longer time. The telegraph is instantaneous so far as the conveyance of the electric signal between point and point is concerned, but it can only.be used by expert operators, and the original message must be written at the dispatching end and transcribed afresh at the receiving end. The telephone, on the contrary, is instantaneous between individual and individual. The expert operator is only required to effect the communication between the two individuals wishing to speak to one another. The moment that has been done they can talk together almost as easily as if they were in the same room. There is no other means of communication which confers advantages even approaching those given by the telephone.

One might, therefore, imagine that the Government of a presumably intelligent country like Great Britain would do all in its power to facilitate the use of this important invention. In the following pages, Mr. Laws Webb, who has devoted special attention to the study of telephonic problems, lucidly tells the story of the dealings of the Government with the telephone, and shows how the public has been deprived of the full benefit which it might have derived from this wonderful invention.